I mentioned, and made (and, um, ate a goodly portion) this cake last week, and then totally didn’t bother to share the results as promised. (I did, for the record, share more than half the cake itself with others, which offers me a small measure of comfort.) Ooh, this was a goodie. With a name like Pecan Toffee Coffee Cake, how could it be wrong? And I’m not even a superfan of pecans, but they’re kind of hard to avoid with most coffee cakes. It’s that or walnuts, and believe me: you won’t find walnuts in anything coming out of this kitchen. Blech. Anyway, half of the toffee pieces are stirred into the batter, and the rest are incorporated into the streusel. I’ll admit, as much as I love a rich cake, I was a little leery of a recipe which included a swirl of  candy, cocoa, and espresso powder [leery, but not really put off all that much, to be perfectly honest], but no need for concern. The result was a very nice cake, maybe a little dry due to my tendency to slightly over bake, and a not-too-sweet-but-very-delicious filling. After a couple of days, it was even better: less dry and even more flavorful. Of course, a couple days beyond that, it returned to its dry state and I was glad to see it go. Nevertheless, this one was a winner. Score another one for In the Sweet Kitchen!

Believe it or not, I didn’t bake one thing this week. No, I’ve been feasting on waxy Hostess treats and ice cream sandwiches instead. Such a classy gourmet, right? Ah, yes.

We have another jam-packed weekend ahead, which is not at all the way I like to roll. Next weekend, we are actually having our garage sale, and I cannot wait. Well, I cannot wait for it to be over, because I hate having garage sales, but I’m totally thrilled by the prospect of clearing out the “I’m saving it for our garage sale” boxes and, for that matter, the garage itself, which is becoming a wasteland of discarded small housewares. We’ve already agreed that everything must go, so we won’t be holding onto the (most likely still full) boxes of stuff for the next sale. No next sale. Everything.must.go.

Hey, and the creative/sewing portion of my brain suddenly woke up and I’m brimming with projects and ideas again. Hopefully, I’ll have some stuff to share next week.

Hope you have a great weekend, Friends!

Posted in 2008: A Cake Odyssey, All Around the Kitchen. Bookmark the permalink.

Let’s see, so when we last left off, I was whining incessantly about the minutiae of my week. And let me tell you, just getting all that madness off of my chest was a relief! Didn’t seem half so bad after that, not even when the other bathtub started leaking into the kitchen two days later. No, not even then.

(Not even when I had to pay $75 to have a repairman come out and tell me that we needed to buy a $3 can of sealant to fix up the problem….  Actually, I was just relieved that I didn’t have to pay him $75 for the privilege of hearing that we’d need to sink thousands of dollars into replacing it before it could be used again. We’re coming out ahead on this one, in my book!)

It was rude of my to leave you hanging on the verdict of whether or not the Mango Bread was a worthwhile endeavor. I’m sure you’ve been on pins and needles wondering ever since, right? Of course! 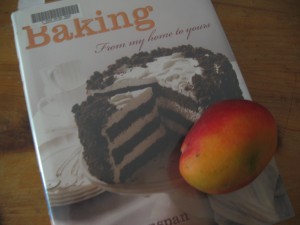 So I veered off-course on my Cake Odyssey ever so slightly to make a stop in quick bread country. Oh, and here’s when I get to make my monthly plug for the greatness that is the public library. I had resisted buying this cookbook, because I’d managed to convince myself that I could probably live without another baking book. And I probably could have done so, but after checking it out of the library and marking a half-dozen recipes and then trying the bread, I now own my own copy. Anyway, this recipe’s a keeper. The only alteration I made is that I replaced most of the oil with applesauce. Although I’d like to convince myself that this make the resulting bread “healthy”, I did it because I’ve made my share of greasy carrot cakes and brownies and now have kind of an aversion to large amounts of oil in a recipe. I will say, though, that it may have been alright to leave in the oil in this recipe, because it looked bone-dry when it comes out of the oven; not very appetizing. The author recommended wrapping it in plastic wrap for a day and then eating it. Nice! After a day and a half in the wrap, it was fabulous. And the mango taste is not very pronounced at all–they could’ve passed for peaches– so I would even be comfortable serving it to someone who is not as big a fan of the mango as me. Unless they were allergic. I’d of course refrain in that case, despite my love for this luscious fruit.

The week before that, I also baked up a batch of S’more Brownies using a recipe I found on (yep) the box of brownie mix. In my opinion, they weren’t s’morey enough, but they are sticky and good and the kids all seemed pretty drawn to them. If you needed a quick not-at-all-good-for-you treat for a bunch of kids, you might want to give this one a go:

Bake a 9×13 pan of brownies according to package instructions (or from scratch, if you’re so inclined). While they are baking, break 5 graham crackers into quarters and set aside. When the brownies are done, remove from the oven, and scatter 2 cups mini marshmallows and 1 cup semisweet chocolate chips over the top. Pop the pan back in the oven for two minutes, or until the marshmallows begin to melt. Remove from oven and lay the graham cracker pieces in rows across the top of the marshmallows, pressing lightly. When completely cool, cut brownies into 20 pieces. (Basically, just cut around the graham crackers.)

There you have it. I might increase the marshmallows the next time around, but I’m not sure if it’s a good idea. I also considered torching the top of them instead of putting them back in the oven, to see if that would lend a more authentic flavor, but it seemed a little ridiculous. Doesn’t mean I won’t try it in the future, though.

Posted in 2008: A Cake Odyssey, All Around the Kitchen. Bookmark the permalink. 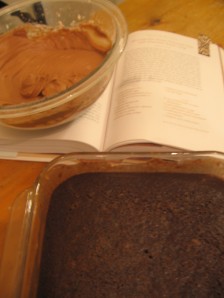 I wish I could say that the cake obsession faded after a day or two, but no. If anything, it only grew in strength, so what choice did I have but to get baking? So come Thursday, that’s what I did.

Since I was finally going to crack open In the Sweet Kitchen, it seemed like the most logical choice would be to start with an easy recipe. All-in-the-Pan Chewy Chocolate Cake with Chocolate Butter Icing was the perfect confidence builder. The name pretty much says it all: you mix the batter up right in the baking dish and then it’s off to the races. [Kathy posted a link to her family’s favorite birthday cake, which is essentially the same cake, except it includes a poured icing rather than a buttercream.] The resulting cake was every bit as presentable as one from a mix (high standards, I know), and even more delicious. It’s not a fancy, decadent dessert, but it is a tasty treat and it did strike me as the kind of thing you’re mom might give you as an extra special after-school snack. Maybe that’s why I felt the need to have a piece at around three every afternoon until it was gone, I don’t know. Oh, and this would also be a good one to whip up if you were bringing a meal to a friend, since you could mix and bake it in one of those disposable pans and send it on its merry way.

I didn’t alter a thing this time around, but I think I might add a pinch more cocoa to the frosting in the future. For that matter, the icing that Kathy makes for hers sounded pretty delish; I might sub that in next go-around.

Next cake on the docket: Pecan Toffee Coffee Cake. I’m working my way up to the S’mores Roulade, but I don’t want to get too cocky here.

Posted in 2008: A Cake Odyssey, All Around the Kitchen. Bookmark the permalink.
Loading Comments...